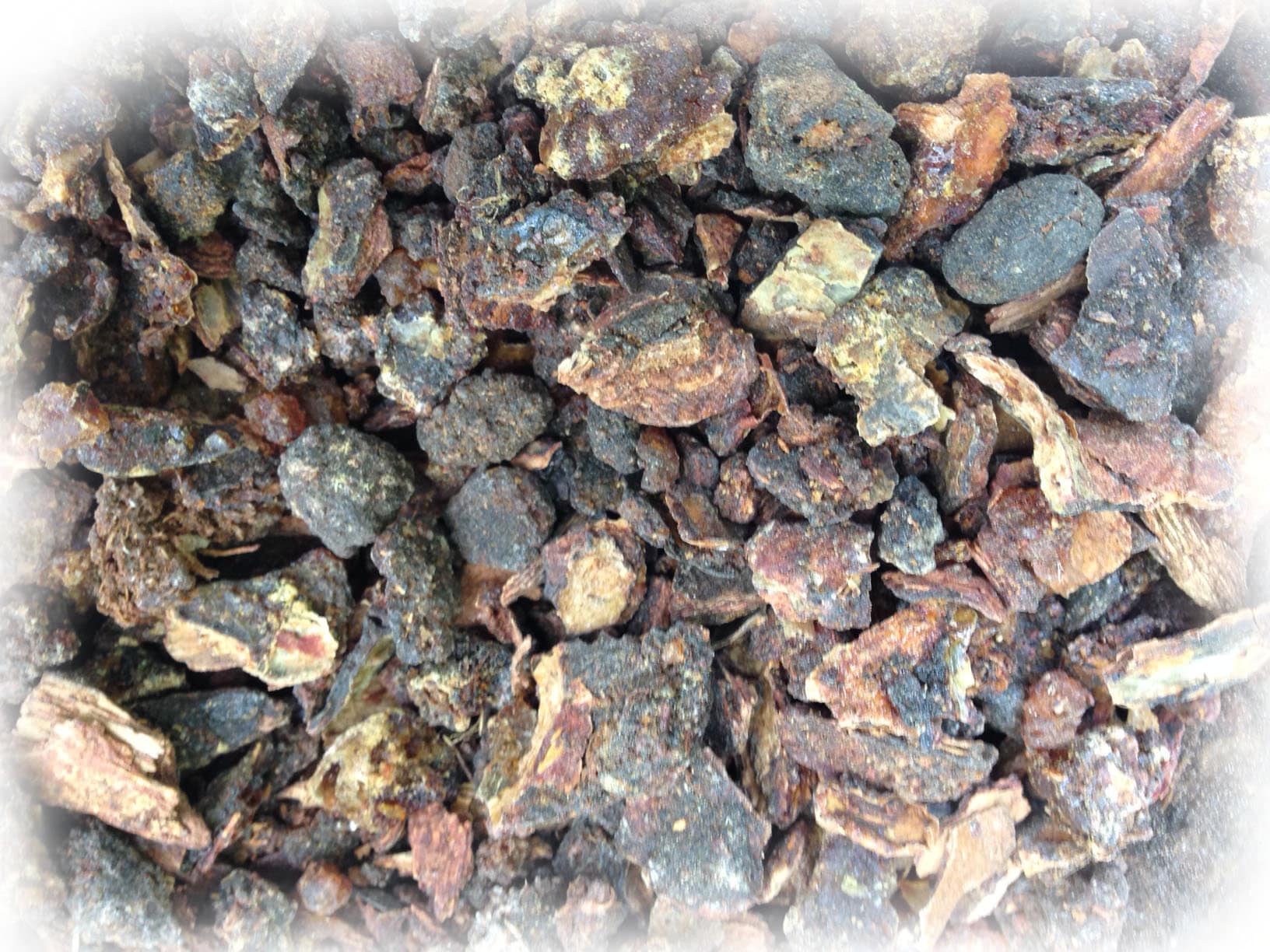 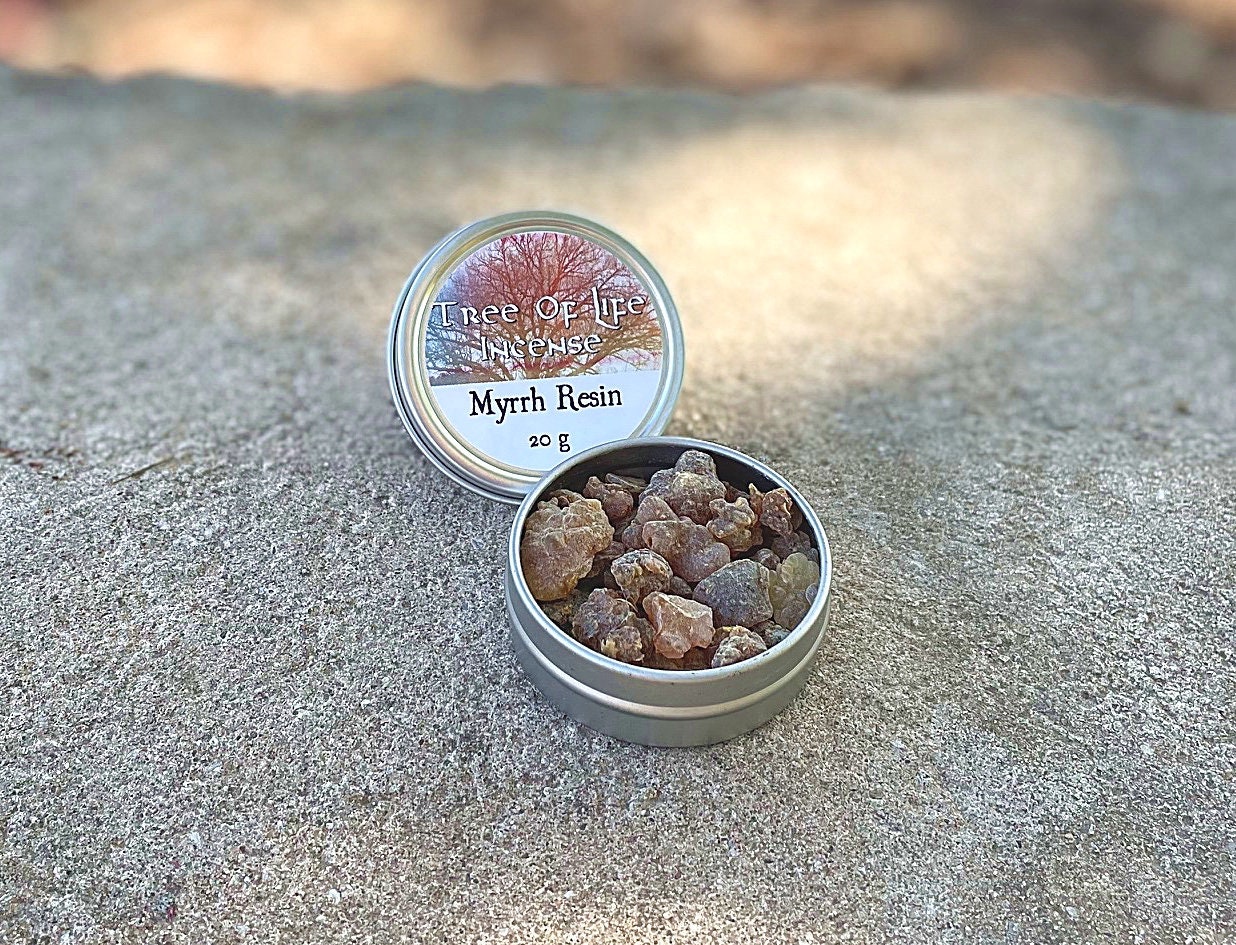 Perfect addition to your altar, incense cabinet, or sacred space! Add to your energetic smudging practices, or just for the lovely scent of pure Myrrh! You will also receive an information sheet on smudging and resins.

Myrrh (Commiphora myrrha) comes from a thorny shrub bearing small white flowers that grows in the Middle East, North Africa, and Northern India. It possesses a richly bitter scent. Prized for its opulent and enduring perfume, myrrh was seen as a magical substance that was capable of connecting heaven and earth. The Egyptians believed that the golden drops of resin were the tears of Horus, the falcon-headed sun god. Known as punt or phun, it was included in their sacred perfume Kyphi, burned at sunset as a thanks and offering to the sun god, Ra. The Egyptians also used it during funerals and in embalming rituals, as it was thought to accompany the soul on its journey to the spirit world and afterlife. The Hebrews drank wine flavored with myrrh to prepare them for worship. This was also one of the three gifts that the wise men presented to baby Jesus, and was also featured in his death, when his body was anointed with a mixture of myrrh and aloes. This exotic substance has been used in spiritual practices for at least 4,000 years. Inhale the scent of the burning incense or crushed resin to awaken your awareness of the spiritual reality behind our everyday existence. It is a great tool to use before prior to or during rituals and meditation, as it strengthens the link between our crown and base chakras. The result can be expanded awareness, tranquility, and the calming of fears and halting the questions concerning the future. Myrrh essential oil is also used for wound and skin healing. Or the resin may be burned and the scent inhaled with visualization to speed healing of the physical body. Pairs amazingly with Frankincense resin, also sold here.

Plant resins, being less processed than essential oils, hold more essence of the plant and more spirit energy. This concentration of the "blood" of the plant is what make them powerful reservoirs of natural energies. They are different than essential oils and are meant to be used in different ways. The most common way to use resins is to place them on a burning piece of charcoal tablet allowing the aroma of the smoke to fill the space, releasing its energy and essence. They are also a key ingredient in making true and real incense combined with essential oils and finely ground woods, such as sandalwood. They can be used for their aromatic qualities alone, as an aid to holistic healing, and of course in spiritual and religious rituals. We burn them alone, or in combination with one another and occasionally combine resins with our herbal smudges in the smoke bowl, to enhance the effects of the herbs.

To smudge yourself or another, direct smoke (this is typically done with a feather) toward the heart first, then over the head, down the arms and the front of the body. To smudge a home, open windows if possible to allow the room to clear. Walk room to room wafting smoke as you go, say a personal blessing if needed. For objects, waft smoke over object or pass object through the smoke (if small). *It is always recommended to protect your burning bowl with a bed of sand or ash, as it can get rather hot if using a charcoal to burn.

"The word ‘smudge’ comes from the old English word smogen. It is cited in several dictionaries as coming from 1400-50 late Middle English. It means to smear, blur, obscure, to smother with smoke, to use dense smoke to protect an area from insects. Another meaning is also ‘taken by surprise’. In English the term ‘smudge’ also means smut or dirt. It has been in use since the 15th century, and first appeared after the Norman conquest, so it’s certainly of Germanic origin." - Rachel Patterson

Smudging is a common vernacular for the sacred smoke bowl blessing, a powerful clearing and cleansing technique for your body, tools, crystals and home. Smudging is a recommended and welcome practice on a frequent basis to clear negative or stagnant energy, clear energies from your body and mind after work, and to purify the air during and after illnesses of all kinds. Also a wonderful tool to cleanse new items entering your home, or after visitors exit, to neutralize and charge the air with positive energy. Smudging can, and should, be done during ritual of any tradition, to create sacred space, and charge ritual tools.

From our home in the foothills of North Carolina to yours...happy smudging for your health and wellbeing. Smudge daily!

Some settling may occur. This is a natural product, some variations may occur.

*Disclaimer* I make no medical claims as to the efficacy of this product, only personal experience. The information in my shop has not been evaluated by the Food and Drug Administration. This information is not intended to diagnose, treat, cure, or prevent any disease.

Will I receive Priority Mail shipping?

Flutes always receive Priority Mail shipping in the USA. If you are eligible for Free Shipping for other merchandise, you cannot request Priority unless you have paid for this upgrade. You will receive Parcel Post or First Class Mail dependent upon the box weight. Thank you for understanding.

Currently due to the pandemic we do not accept returns, except for our regular 7-day return policy on flutes. Thank you for your understanding.

0 items in your cart